INTUITIVE PATTERNS FOR THE MONTH OF MARCH 2019

Home Intuitive Patterns INTUITIVE PATTERNS FOR THE MONTH OF MARCH 2019 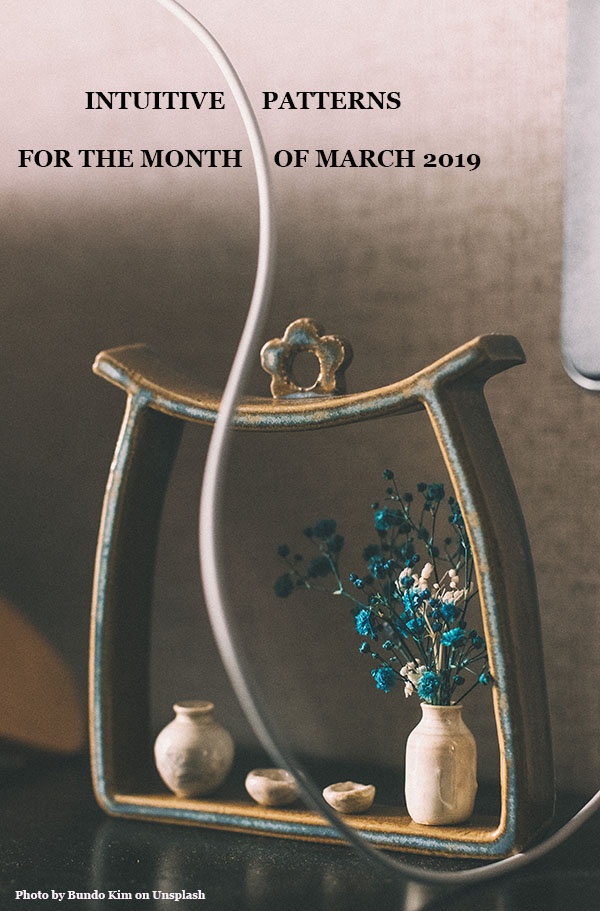 INTUITIVE PATTERNS FOR THE
MONTH OF March 2019

Yes, the North Node continues in Cancer this entire year and that will not give anyone a break from the emotional intensity that has everyone a bit exhausted.

The goal is to understand what you feel and why. Don’t worry you have the whole year to figure that out.

Mercury goes retrograde on March 5th in Pisces and this makes what you feel even more emotional. Expect miscommunications in media that causes more confusion and people leaping to conclusions because they cannot see what is real.

Jupiter is home in Sagittarius and Neptune is home in Pisces. This will make everyone take a hard look at those who pretend to be spiritual. (Including yourself!) I expect huge numbers of people to notice when someone’s words and actions do not match. Many (so called Spiritual Leaders) will fall off their high horses in March. Expect even more shocking illuminations along the same line in July. Jupiter’s very bright light and powerfully strong gravitational pull is going to illuminate those that are lost in Neptune’s delusions and perceptual bubbles.

The next day, March 6-7, Uranus finally leaves Aries and goes (for the next 7 years) into Taurus. Uranus shifting signs is a big deal every time it decides to change its astrological coat. After all the planets are always in motion but the signs remain steady. While over the past 7 years, Uranus focused the energy of Aries into this obsession with the self, making everyone suddenly an expert in areas that they have no discernment, education, or clarity. And it promoted totalitarianism, the Islamic Revolution, and the insanity of those that want to be monarchs. It helped the rich get very rich, the middle class to suffer, and the poverty level to worsen in our county.

With Uranus going into Taurus for the long haul, it may make ownership (a Taurus conception) of land and property go through a fundamental change in perception as it did 84 years ago, just before World War II. Uranus likes to blow things up and in Taurus it tends to want to blow up money systems, stock markets, banks, and Real Estate.

Perhaps it will make people live on less and need smaller homes. Perhaps it will let people find freedom in not having big mortgages over their head while others may want security that is no longer afforded them because of the changes in the world.

Just remember that Uranus does not do anything small. I expect a ruckus to begin in March and continue for quite a while. Pay off your credit cards, stay on top of your bills, simplify, and don’t take on financial burdens that you don’t feel very confident in being able to handle.

The question in the cards becomes, “How do we heal this rampant hatred that is spewing from the gutters of humanities consciousness?” Clearly there will be no short and sweet answer. This astrology is frozen in the winter signs and with such things, it can take a long time to for hurt to thaw and an honest conversations to happen.

The cards point to the fact that most people do not have roots. Moving without those roots make you insecure and unsure. Your heart grabs at things externally for security. But those things are never really secure. The integrative experiences of life allow you to feel connected and whole. But first you must know your own heart. It is the power of that heart that allows you to belong and to know from where your connection to this world comes from.

In life, you have to find the balance of your own inner archetypes. You have a powerful part; such as an eagle that exudes power and confidence but in owning power you have to face the peril of aloneness. You also have an inner archetype that expresses your purest essence and soul connection, such as a swan. That swan embodies the gentle side of your nature and is your perfect self that is forever beautiful and unique. Power and purity combine in ways that show that mystical union and alchemy that is new life and the process of self-creation.

The world is filled right now with reflections of self-proclaimed masters and leaders. But mastery is not about mastery over others. Fear can do that very easily. It is about having mastery over oneself. When one cannot control oneself, that person has absolutely no control over others. Thus the way they control is through manipulation, lies, fear, guilt, shame, and threats. People are extremely transparent if you really take a look at them. This month, take a look at yourself. Where do your actions, gestures, and words reflect your enlightened self or your human self? Where do you live your truth?

Truth cannot be taught. There is no way to teach it. It is something beyond words. It is a pure transmission of consciousness. Truth has an open honesty. It stands strong against the fires of chaos and destruction. Truth provokes a longing within another that allows that person to grow beyond what they know and into the potential within their own soul.

You gain strength from having hope and from using that hope to move past your human indulgences, disappointments, and neediness to move into the higher vibrations of your potential.

May this month, open your mind, allow you to see, integrate truth, and reclaim real hope.