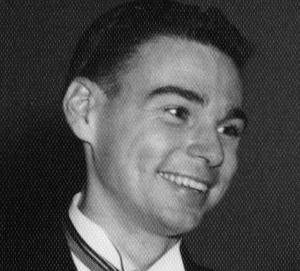 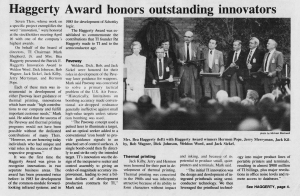 Let me tell you about my dad.

He was a man of many secrets. And those secrets kept the United States ahead of Russia during the cold war.

My father was a gentle man that was going to be drafted into the Korean War so his choices at college were to become a doctor or an engineer if he was going to avoid the draft. He chose to be an electrical engineer. But he spent the rest of his life protecting and serving his country.

My father’s generation has survived the Great Depression and it was after the two great world wars. He wanted to create something that saved American lives and he came up with a great idea …. a laser guided missile. The great military advantage that this country has right now is because of my father and his team of brilliant engineers and scientists that were committed to a very different strategy than had ever been devised.

When my father had the idea he approached a General in the US Military about it and proposed it to him. At that time the Generals could write a check for $999,999.00 without having to go through channels and the general was willing to take that risk and wrote my father that check. Then it was up to my father to figure out how to deliver that by the deadline.

Now, you have to remember that it was the early 1960’s and computers were not so great at that time. But my father jumped and created the prototype that eventually became what you see today.

The cold war was in full swing and so I spent my childhood with a man who could not tell me what he did for a job. I assumed he made those fancy calculators that were just coming out. My first clue came when I was in grade school and I got sick at school. The family protocol was for me to call my mother at work but she was not there so I called my father. I had to go through 3 secretaries to get to him and they asked a barrage of questions to me, which is thought was odd. By the time I got to my father, his first question was, “What is wrong?” with an alarmed voice.

Throughout my childhood there were little clues that were not normal for any family I knew. He would be gone for 4 months at a time, he could not phone home, my mother worried about him, and he seemed to be always traveling and very stressed by the time he got home.

When I left home to go to the Berlin Ballet he was very unhappy about it. Finally he calmed down and handed me a gold American Express card with my name on it and said, “If at any point I call you and tell you to get out of Berlin, you take this card and get whatever ticket you can get and take the next plane out of Berlin. Do you understand me?” I said yes, but thought he was being vey stern and hard nosed about it all. To me this was a grand adventure to him it was terribly risky and outright dangerous.

It was only after he retired and was declassified that some of the stories began to leak out.

He worked with NATO and pointed all the laser guided missiles at Russia during the Cold War and he had one pointed at Berlin. That was why he was so serious and concerned.

I remember going over to the East Block of Berlin when the wall was still up and being stopped at the Friedrickstrasse subway checkpoint under Check Point Charlie. I was going to see the Pergamon Museum which had the Walls of Babylon recreated inside this huge and famous museum. My German friends went through fine but me they stopped and they took my passport and put me in a room with a double-sided mirror. They watched me for 4 hours and just when I thought I was never getting out they decided to let me go.

On the other side my friends were in a panic because the East German Police were very dangerous during that time and people disappeared and were never seen again. The rest of the day myself and my group of friends were harassed by the police who would come up every hour or so and ask to see my passport and visa, in perfect English. We finally left because it was very clear that I especially was not wanted there.

Once I got through the checkpoint I called my father and told him what had happened. He was very angry with me. He said, “What were you thinking? You can’t go to the East Block. You could have been killed. What on earth possessed you to go over there?” I told him about the Museum and the walls of Babylon. He told me that under no circumstances was I to go over there again. I asked why, and once again he could not tell me exactly. All he would say was that things that he did put me on their radar and it was not safe.

In my mind he was like James Bond. When he was in Europe he carried a briefcase with handcuffs on them. I never knew where he was or when he could come to visit me because now I understand that he was never allowed to go to Berlin at all. He was breaking all the rules coming to visit me.

But again, little things would leak out, such as; when there was the Freedom in Europe Day in Berlin. He was there and this is a festival where they used to march the old tanks down the streets in Berlin in a parade. My father would watch calmly and say, “Do you know how to blow that particular tank up? You just put a grenade right here (pointing and explaining the exact spot) and the whole thing will blow up. I would always look at him carefully and I recognized always that my father was an enigma wrapped in a mystery. He knew so much but most of his life we was not able to say much.

In retirement, his best friends were the Marines and old Army and Navy Pilots. I would see them in corners laughing and reminiscing about things that only old warriors would find interesting.

Many years into retirement my parents were invited to an event down at the North Las Vegas Military Base. My mom’s story was that they entered a huge hanger on the base and there were pictures in a pyramid on the wall. The top picture was of my father and over it was a banner that said, “Pioneers in the Aviation Field”. Even my mother was stunned. Then General Colin Powell came up to my mother and said, “Kay Wagner, it is an honor to meet you. I have heard so much about you!” My quiet housewife of a mother was shocked that General Colin Powell even knew her name.

When Texas Instruments sold my father’s patents to Raytheon many years after he retired they sold his patents to them for 5 billion dollars. My father was an electrical engineer and only made $35,000 most of his life. He never got a royalty for his tremendous effort or a bonus from his company. There were many others that worked on these top-secret things that have made our military strong and our country powerful. My father was one of many that were the unsung hero’s of a time when lives were at stake and your commitment and integrity were more important than your personal feelings.

My father won the Haggerty Award and at the time he was the only American to win that award. I am very proud of who my father was and what he did for so many with really no glory or reward. I know that he is not alone and on this Father’s Day I send a great big thank you to all those men and women, father’s and mother’s out there who did great things but have never been given financial reward or been recognized for their tremendous effort.

My father died 8 years ago and I miss him still. He was a kind and very private man. He was a man of honor and integrity. He told great stories and never put others down even when he was, by far, the smartest person in the room.